Thousands of years ago Angkorian people construct great temples in three mountains – Phnom Bok, Phnom Bakheng and Phnom Krom. Phnom mean Mount in Khmer language. Temples are related to Hindu goddess and also known for the triple sanctuary dedicated to the Trimurti which means three forms. All three temples were built almost end of the 9th century, during the time in power of King Yasovarman (889 – 910 AD). Visiting all three temples will make you understand about Ancient time as well as the natural surroundings of Angkor National Park. 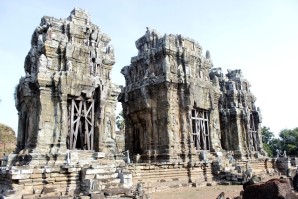 Phnom Bok is located northeast of Eastern Baray – one of the important reservoir in Angkorian Time. From base to submit, over seven hundred feet long and 635 stairs steps will waiting you from here to climb up, at the last you will see Phnom Bok Temple. Temple is in rectangular shape and has three duplicate shrine towers in row on a single terrace. Darken yellowish sandstone can be found in the temple’s construction while brickwork is used for platforms and paths. One of the biggest Linga can be found somewhere along the ruins and spoiled army missiles. Panoramic view is all round over Tonle Sap Lake, massive plains of rice fields and some part of Phnom Kulen. Don’t forget to check the temple west entrance for the Hindu structure if you are happen to visit. 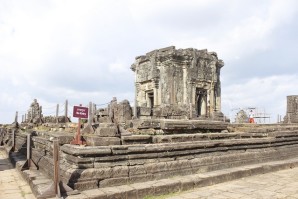 Phnom Bakheng is residing near Angkor Wat Temple and before entering to Central Angkor Thom’s South Gate. Temple facing to east and structured in pyramid form with six levels. Bakheng temple refers some symbolic representation as home of Hindu Gods. The central building represent the axis of the world and the other 108 small constructions means the 4 lunar phases with 27 days each. Seven level of shrine represent the heavens. The most impressive view of Angkor Wat and other temples from high and the moat surrounding can be witness from the hill top.

Rocky Hill Phrom Krom is located from 12km southwest of Siem Reap – Cambodia, some legend says about the monkey general hanuman. The temple focus on three towers rowing north to south. Central tower is higher than the other two adjoining towers and represent to Shiva, the south one is to Brahma and the northern one to Vishnu. West gate of the temple will exclusive the utmost spectacular view of Tonle Sap Lake and floating villages. 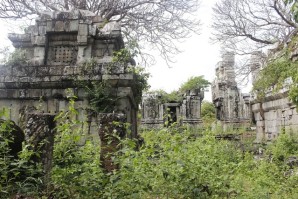 When you visit Angkor Wat Tour sightseeing in Siem Reap – Cambodia, Phnom Bakheng is famous for sunrise or sunset for tourist and crowded over the hill. If you are looking for a peaceful and tranquil sunset, Phnom Krom is the best choice while Phnom Bok is offering something unique site for landscape and fauna. Of course all temples have capability to make you wow with nature and abandoned architecture.