Angkor Wat, the world’s largest ancient and religious monument located in Cambodia, is a Theravada Buddhist temple which was formerly a Hindu monument. The complex was built by Khmer King Jayavarman II in the early 12th century as a symbol of excellence of the state architecture and eventually his mausoleum. The national importance of this monument for Cambodia can be learned from the fact that it appears on its national flag and every currency notes. 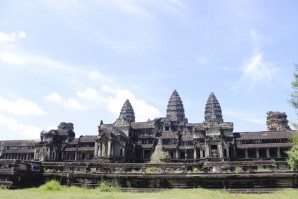 This classical example of the Khmer Architecture inspired from Dravidian architecture enjoys the status of UNESCO world heritage site. The Angkor Wat temple has a great deal of symbolism associated with its exclusive construction, architecture and structure. There are different mystical stories attached with its construction and some of those narrate that it was built in a single night by some heavenly architect. 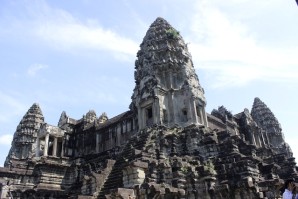 Its small scale sandstone built prototype of the universe which exhibits a conceivable model of the planetary world. The central tower which is erected at the center of temple actually symbolizes a fabulous mountain known as Meru which is often regarded as placed exactly at the center of the universe while its five towers are a depiction of the rising peaks of this mountain. 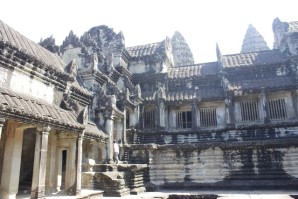 Khmer architects preferred to build it with the help of sandstone blocks rather than bricks which refer being as a unique building block of that time. The coherence, consistency and the lucidity of the design of Angkor Wat makes it comparable with ancient Greek and Roman architecture.

Being a place of religious importance it was decorated with religiously revered elements such as the statues of God and Goddess, divine celestial entities, heavenly objects, pediments and projections of religious beliefs. The beauty, mightiness and splendor of the place are well preserved even today which attract the attention of the visitors from all over the world and invite them to look and praise this historical masterpiece of architecture.