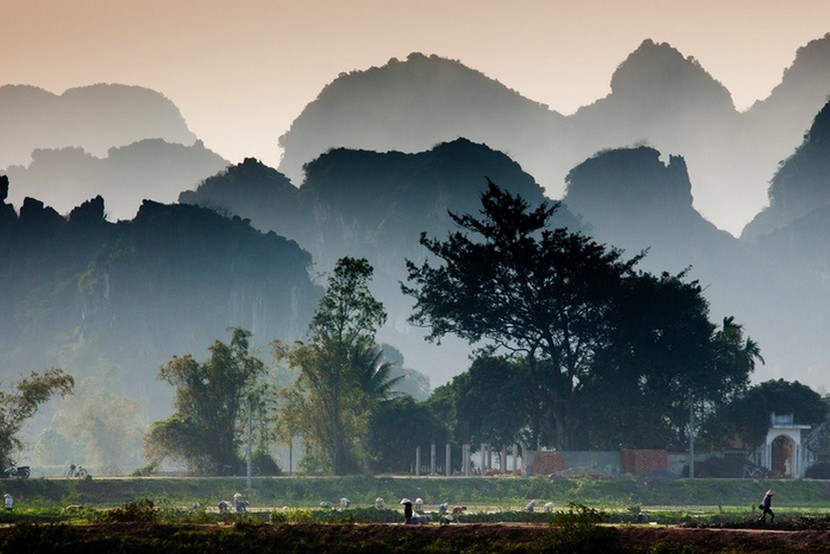 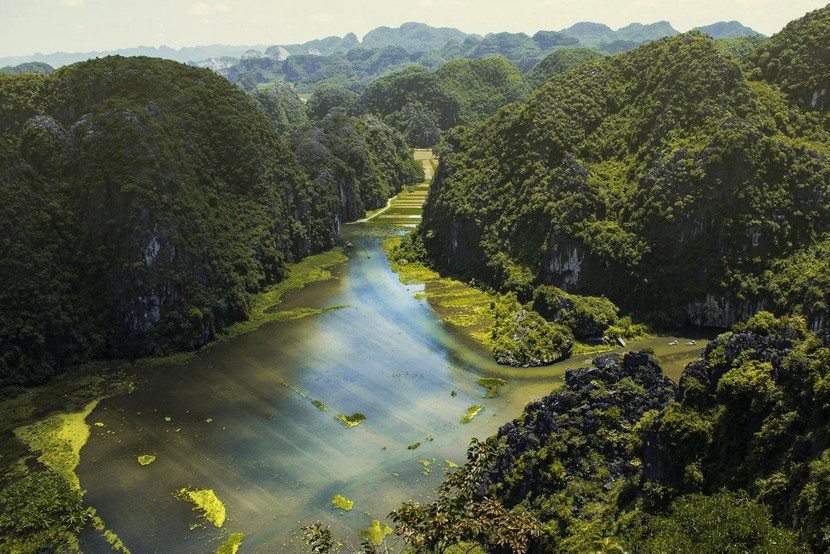 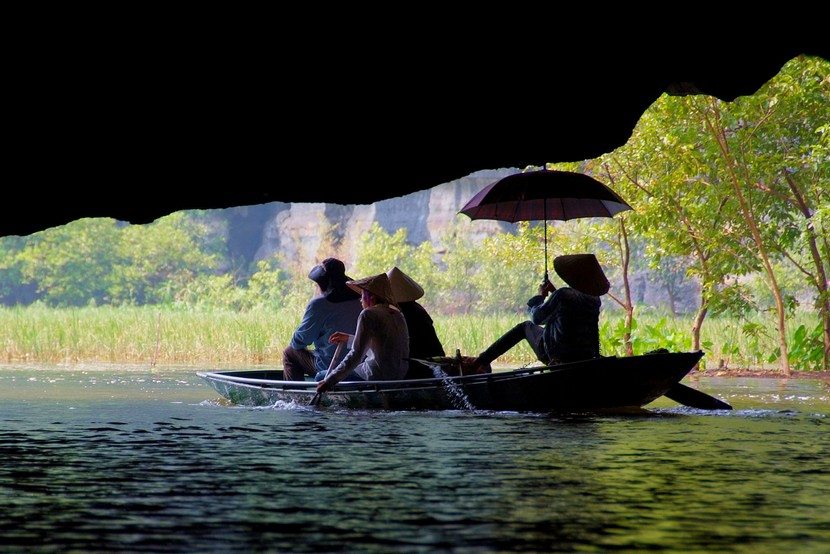 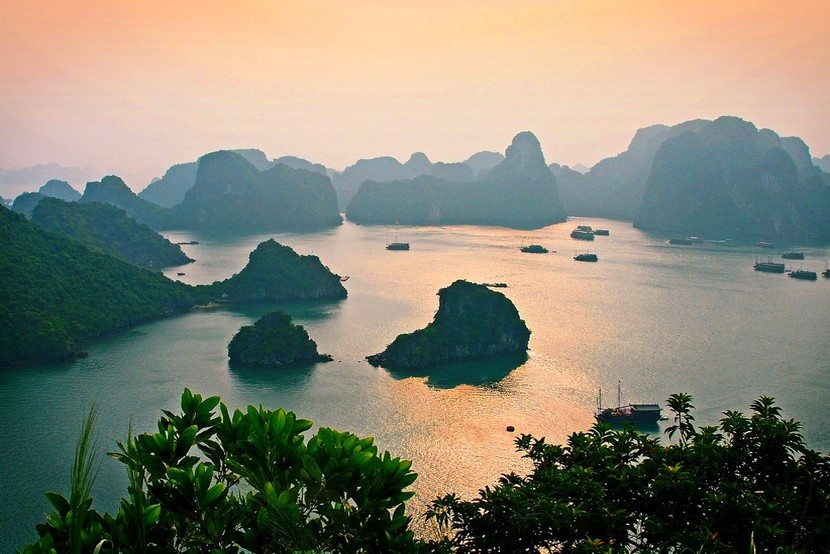 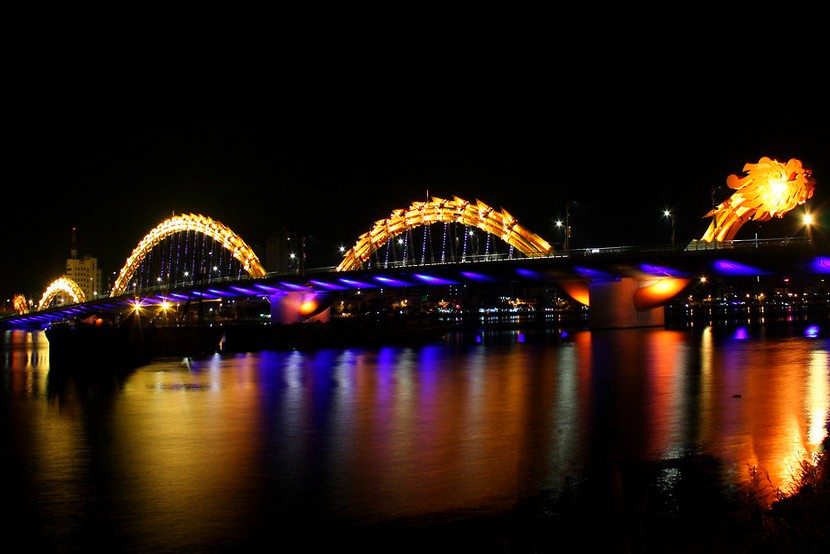 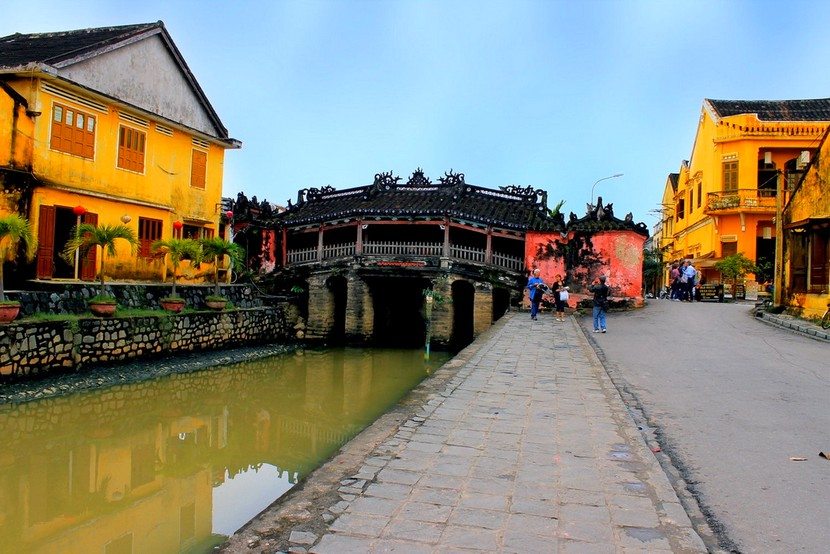 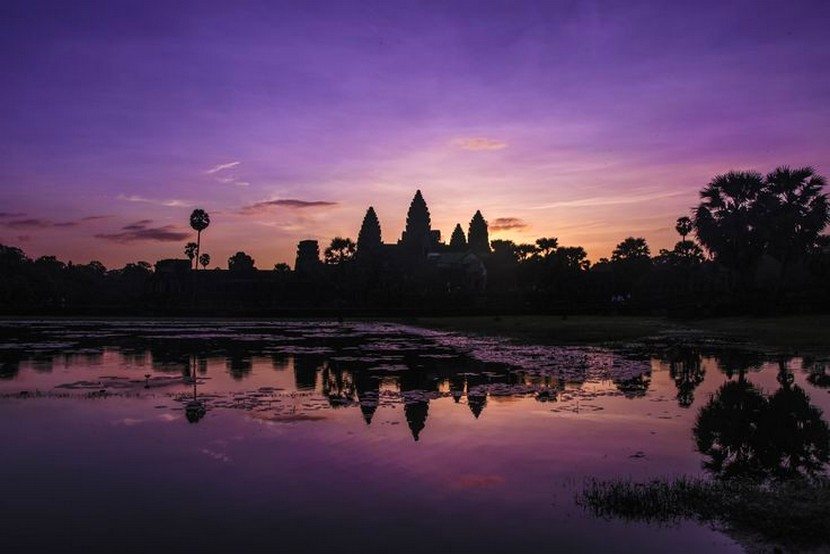 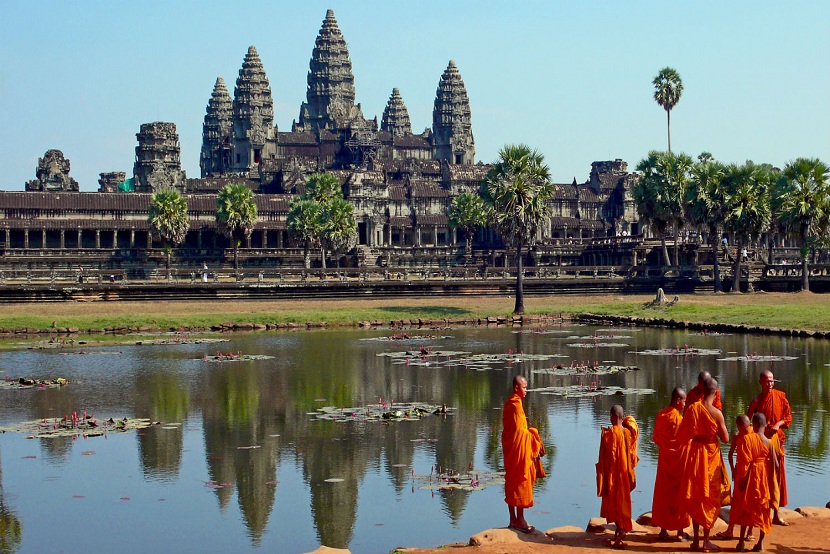 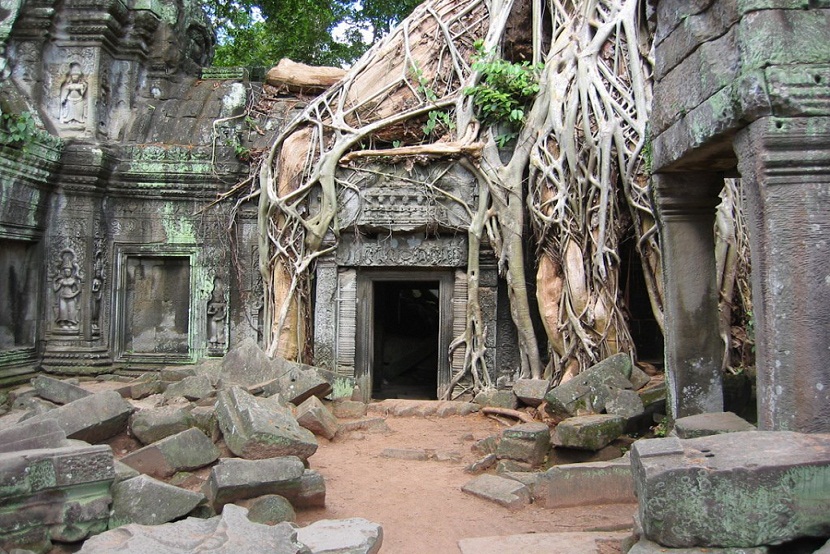 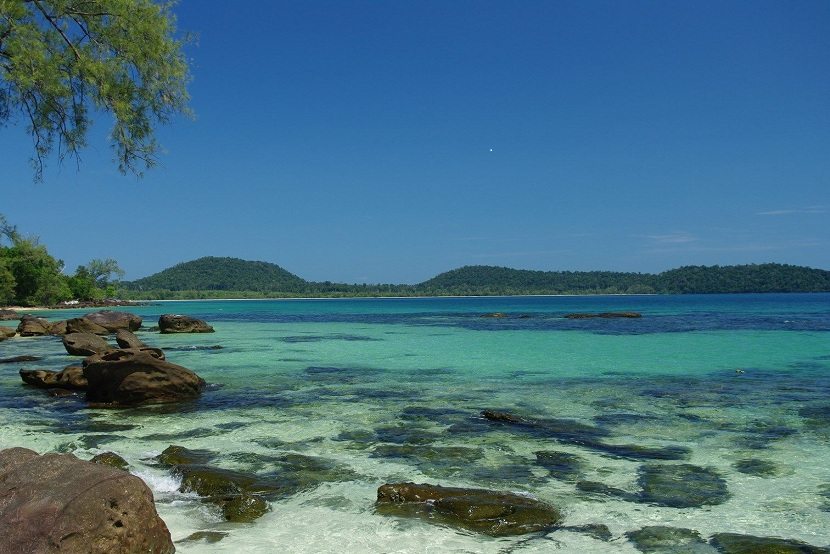 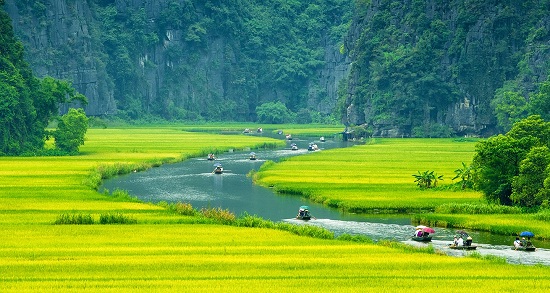 Welcome to Hanoi, Vietnam’s bustling colonial capital. Upon arrival will greeted by our guide and driver then transfer to hotel for check in. Free at leisure time. Overnight at the proposed hotel in Ha Noi.

Upon arrival will greeted by our guide and driver then transfer to hotel for check in. Free at leisure time. Overnight at the proposed hotel in Ha Noi.

8:00am Pick up at the hotel in Ha Noi and then leave for Ninh Binh province (100 km south of Hanoi). Arrival at Hoa Lu which is once depicted the ancient capital of Viet Nam, settled in the 10th century. Visit temples of two dynasties of Dinh and Le with the unique architectures from the old times. Short break for lunch at the local restaurant. Take the sampans boat to visit Tam Coc (Three Caves) to drift down the river among the villages, mountains and lush rice fields. Pass through 3 caves "Hang Ca - First cave, Hang Hai -Second cave, Hang Ba - Third cave" to get a unique feeling of the mesmerizing underground system. Boat returns to the dock for taking the bus back to Hanoi. Overnight at the proposed hotel in Ha Noi.

Transfer to a restaurant for breakfast then leave for Ha Long Bay through the Red River Delta. Board the Junk and enjoy a welcome drink on arrival, check in to your cabin. Enjoy a sea seafood lunch served on board. Cruise on the Bay and enjoy beautiful views of this world natural heritage site with limestone cliffs growing up from the green tranquil water. See Dinh Huong Island, Ga Choi Island, Dog Island and Sail Island. Visit Sung Sot Cave, the nicest cave in the Bay. Visit the Vung Vieng fishing village by local rowing boat (01 hour) or Kayak into the village then return to the vessel for your leisure or join one of the following optional activities: Sunbathing, traditional massage, swimming etc Have dinner and relax in the quiet and calm of the Bay. Overnight on board

Wake up and start your day with Taichi on the sundesk. Have breakfast, coffee, tea and pastries… for breakfast are served in the dining room with morning view of bay’s landscape. Transfer by tender to the Surprise Cave. Walk up about 100 steps to the cave entrance and tour the cave for approximately 45 minutes. Walk down about 100 steps and return to the boat. Have lunch/brunch while cruising back to the pier. Return to Ha Noi and transfer to Noi Bai airport for boarding the flight VN1545 (19:55pm - 21:05pm) depart for Hue. Upon arrival, picked up and transferred to hotel for check in. Overnight at the proposed hotel in Hue.

8:00am Pick up at the hotel and then take time to discover Hue for visiting some of the Nguyen Emperors’ mausoleums, Minh Mạng tomb, Tự Đức tomb, and Khai Định tomb. Each tomb brings the uniqueness of each King about his palace with his orient. After the visit, enjoy performing Programs of VO KINH VAN AN - Vietnam Traditional Kungfu. Lunch at a local restaurant. In the afternoon, visit Imperial capital where Nguyen Emperors lived in the past and the Thien Mu Pagoda which is the most ancient temple in Vietnam, which was established under a mysterious legend on the riverbank. Transfer to the boat station and take a boat on the gentle Perfume River and do not miss the sunset on the river. Back to your hotel. Dinner on your own. Overnight at the proposed hotel in Hue.

Breakfast at your hotel. Transfer to Hoi An. Stop over for photograph, time for admire the panoramic view of Hai Van pass and Da Nang City, Lang Co beach and Marble Mountain. Dinner at your own. Stay overnight at your hotel of choice in Hoi An.

Breakfast at your hotel. Enjoy your leisure time until transfer to Da Nang for boarding the flight (17:15 – 19:20) depart for Siem Reap. Upon arrival will greeted by our local guide and driver then transfer to hotel for check in. Free at leisure time. Overnight at the proposed hotel in Siem Reap.

In the morning after having breakfast we will exploration of the temples. Enter this last capital of the Khmer empire through the Southern Gate where giant carvings of gods and demons flank each side of the entrance. Inside this great city, explore the Royal Enclosure, Phimeanakas, Elephant Terrace and Terrace of Leper King. Feel the serenity that exudes from the stone face carvings of the Bayon and temple walls covered in emerald-green moss intertwined with roots which many deem the most charming of all, Ta Prohm. Afternoon exploration to Angkor Wat, an architectural and artistic masterpiece of the mighty Khmer Empire. Sunset at Phnom Bakheng or Pre Rup paints the temple in an orange hue. Dinner on your own. Overnight at the proposed hotel in Siem Reap.

Breakfast at your hotel and check out, then transfer to Siem Reap airport for a short flight to Sihanouk Ville. Flight departs from Siem Reap. Duration: 50 minutes Upon arrival we will be picked up by a private driver and driven to our hotel for check in. The lovely beaches of Sihanouk Ville are some of the most unspoiled in all of South east Asia. There are some 10 km of beach stretching the whole length of the town and dozens of small islands just a short boat ride away, which make for a perfect tropical getaway, with facilities for swimming, snorkeling or scuba diving. This free day will provide an opportunity for you to relax, sunbathe, or enjoy the various water sports on these beautiful beaches.

Breakfast at your hotel. Free time for your own activities. Lunch & dinner on your own. Overnight at the proposed hotel.

Breakfast at your hotel. Free time for your own activities. Lunch & dinner on your own. Overnight at the proposed hotel.

Breakfast at your hotel. Check out and transfer to Phnom Penh for boarding flight depart for Ho Chi Minh City. Upon arrival at Tan Son Nhat airport, picked up & transferred to hotel for check in. Dinner on your own. Overnight at the proposed hotel in Ho Chi Minh City.

Breakfast at your hotel. 8:00am Take the morning trip to visit Independence Palace, also known at the Reunification palace, was built on the sight of the former Norodom palace. The Independence palace is a widely known landmark of Ho Chi Minh City and was designed by the architect Ngo Viet Thu. Continue seeing the beautiful structures from the French Colonial times such as the Notre Dame Cathedral, the historic Central Post Office. Followed by the remarkable site of the War Remnants Museum the museum has a vast display of the both the Indochina wars. Have lunch at local restaurant. Depart for Cu Chi tunnel, the trip will take approximately one and a half hours bus driving. Upon arrival, before exploring the tunnels, you will have some short introduction followed by introductory video about how the tunnels were constructed and how the people survived in the harsh conditions of the war time. Then, spend your time to explore the remaining area and tunnel systems which included the special constructed living areas with kitchens, bedrooms side by side with other martial facilities like storage, weapons factories, field hospitals, and command centers helping whoever lives inside the tunnels meet their basic needs. Besides, there are also many hidden trap doors and dangerous traps within the maze-like tunnels for security purpose during the war. Afterward, special tea and cassava (guerilla’s food during the war) will be served. Break time for relax or time for those who want to try the real shooting gun. Return to Saigon. End trip.

Breakfast at your hotel. A smooth one-and-half-hour bus ride through rice field scenery along National Highway 1 brings you to the beautiful rural district of Trung Luong. On arrival at My Tho, after visiting Vinh Trang pagoda, take a motor boat to enter My Tho city through Bao Dinh natural canal. Then pay a visit to My Tho’s colorful street fruit market alongside the canal to soak up the lively atmosphere and watch the locals trade their produce. Take a leisurely cruise on the Tien River to view the fishing port, the traditional stilt houses and boat building workshops, and the four beautiful islands known as Dragon, Unicorn, Phoenix and Tortoise islands. Enjoy lunch at the local restaurant, then visit the coconut candy mill and take an amazing rowing boat trip along the small canal on a hand-rowed sampan under the shadow of the water coconut trees along natural canals. Then enjoy seasonal fruit & honey tea to the sound of "Southern Vietnamese folk music", performed by locals. Meet at the bus and return to HCMC. This trip provides a fascinating insight into daily life in the Mekong Delta and you are guaranteed to take home your own private collection of beautiful memories. Return to the hotel. Dinner on your own. Overnight at the proposed hotel in Ho Chi Minh City.

Breakfast at your hotel. Enjoy your leisure time until departure. End trip.

Flight ticket is not included (Subject to be changed on the air fare without prior notice, will be advised when the trip is finalized)