8 Interesting Facts about The Son Doong Cave in Vietnam

Son Doong, belonging to the system of Phong Nha – Ke Bang caves and grottos, is located at Son Trach Commune, Bo Trach District, Quang Binh Province, Vietnam. From the time of discovery until now, Son Dong Cave has been referred to as the world’s largest natural cave. With its phenomenal magnificence and the enormous size, the cave is always an aspiration of numerous travelers in the world for a Vietnam tour package. Then, some following facts about the Son Doong Cave will make you eager to find out any opportunity for an expedition there at any cost! 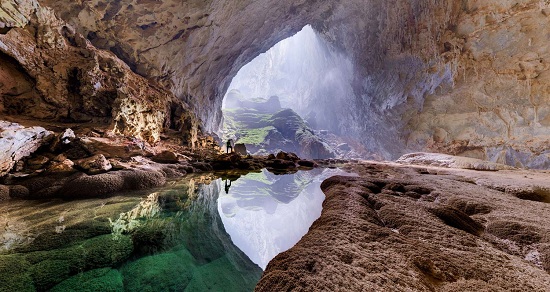 8 interesting facts about the Son Doong cave in Vietnam

A local farmer, namely Ho Khanh found the Son Doong cave entrance in 1991. He said that the time of this discovery was when he was earning his daily living by searching for aloeswood in the jungle. One day, he unintentionally got caught in the heavy rainfall on the way to work; getting worried about the potential flood sweeping through the jungle, he was prompt to seek shelter from the rain. Accidentally, the place where he sheltered was exactly Son Dong Cave. It is utterly an interesting story about finding out this cave first.

Son Doong Cave had been missed for 15 years later

By the time when the local farmer found out Son Doong, he never had any idea about immense value of the cave. After a few years since this discovering, he left his aloeswood seeking and restarted the farming.

The cave’s trace was still a secret during 15 years until 2006 when the British Caving Research Association was in their exploration for new caves in Phong Nha – Ke Bang National Park. At that time, the farmer told them about his story of unintentional cave-discovering, and then the expedition for this cave’s exact location began.

Son Doong Cave was not displayed on Google Earth

Unfortunately, everything the farmer Ho Khanh could reveal from his memory was just an overwhelming cave with continuous gales. Besides, even with the support of modern equipment and Google Earth, the expedition from the British Caving Research Association could not still find out the exact location of Son Doong. Eventually, in 2009, the farmer came across the entrance again, and since 2010 the cave’s exit has been public in the world.

Son Doong Cave is capable of becoming an airport

It is estimated that the 2-5 million-year-old cave is 5km in length and can accommodate up to 68 Boeing 777 airplanes, but the number may be larger because scientists suppose that even the most state-of-the-art machines and devices can’t also help discover the exact length of this wonder.

Son Doong Cave is called the Great Wall of Vietnam

Inside Son Doong Cave is a dazzlingly fabulous image as there are lots of cave stretches about 91.44m wide and 243.84m high, which is large enough for a 40-story building in New York, according to Carten Peter with his photos taken in May 2010. Hence, the splendor and grandeur of the cave makes it “The Great Wall of Vietnam” (quite similar to the Chinese name “the Great Wall of China”).

Son Doong Cave is home to “the Garden of Eden”

Not only is the cave famous for its enormous size, but also a rich diversity of flora and fauna. More detail, the expedition members spotted an intact jungle with the biodiversity without the humans’ marks. To honor the extraordinary natural beauty of the jungle, the cave experts have called it “the Garden of Eden”.

Son Doong is where we can find big limestone cave pearls

Another special thing about the cave is that it includes a system of emerging stalactites and limestone cave pearls dispersed in ancient pools. Especially, rare limestone cave pearls formed from the natural phenomenon through hundreds of years, in which water dripped down, dried up, and left calcite layers covering grains of sand.

With the irresistible magnificence, the cave has attracted lots of exploration lovers, many of who are foreigners and especially celebrities. The top Czech model Jasmina Mala and the Prince Ahmed Hamdan from Abu Dhabi have ever gone on the expedition to this natural marvel.

Discover Son Doong Cave – the biggest cave in the world:

What to Eat in Da Nang City

The 4 Most Attractive Cities in Vietnam for Travelers